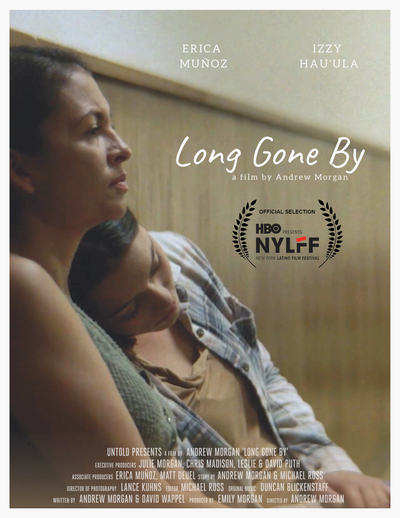 Watch The Trailer Here
Praise for LONG GONE BY From The Festival Circuit:
“A love letter to humanity… Capturing the essence of our current immigration policies and impact, this small yet powerful film packs quite a gut punch.” -Corriente Latina
“At the film’s center is this surprisingly tender story of sacrifice and motherly love… Andrew Morgan’s gut-wrenching drama Long Gone By is another production with its heart in the right place and its mind on the struggles of undocumented people trying to survive in a system built to keep them excluded.” -Remezcla
“Beautifully painful… Emotive and well made with performances that hit” -But Why Tho
“Andrew Morgan and his talented cast may help you reclaim some part of your soul in this film.” -Film Threat
“Harrowing and heartbreaking.” -Popaxium
“Long Gone By is the kind of film that happens to arrive at the right place and right time.” -Premo Network

New York, NY – April 28, 2020 – HBO is poised to premiere the feature film LONG GONE BY, starring Erica Muñoz, who is also the associate producer, directed by Andrew Morgan and produced by Emily Morgan. The film will air on HBO Latino linear channel at 8 pm, Friday, May 1, 2020, and on digital platforms, HBO NOW, HBO On Demand and HBO GO.

Originally premiered at HBO’s New York Latino Film Festival last summer, LONG GONE BY, tells the tale of Ana Alvarez, a single mother from Nicaragua living in Warsaw, Indiana, with her teenage daughter, Izzy. When a routine check-in leads to a deportation order, life as Ana knows it ends. The timing could not be worse as Izzy has just been accepted to Indiana University, a dream that becomes a nightmare when she discovers that because of her immigration status, she will not qualify for the needed scholarships or federal aid. Faced with an impossible reality of a lifetime away from her daughter, Ana decides to risk everything in the last chance effort to leave Izzy’s tuition paid before her time runs out. An intimately unnerving portrait of a woman willing to sacrifice everything to give her daughter a chance at a life she never had.

Said director, Andrew Morgan, “There is nothing in my life that comes close to relating to what we witness Ana and Izzy go through in this film. The prospect of facing a lifetime away from my children is a nightmare I have never had to imagine. For me, that reality, as I listened to the stories of families being torn apart, gave me the motivation to do something in my own way to shine a light on these issues and ideas.” Said lead Erica Muñoz, “I’ve seen people forced into impossible situations. Parents having to make unthinkable decisions in order to try to give their children a better life. Since we shot the film, the horrors are only amplified.” These issues are what drove the cast and crew to create LONG GONE BY, and the effect of the film is palpable.
The film was set and shot on location in Warsaw, Indiana. Morgan wanted to portray the classic small-town America through the eyes of an outsider. He said, “I absolutely loved working there, the entire community was so helpful, and it gave the film a look and feel that I really love.”
“Andrew is focused, driven, kind, incredibly patient, and ridiculously talented.  Working with him was, without question, the most rewarding professional experience of my life,” said lead and Associate Producer, Erica Muñoz. “The rest of the team – in particular, Emily Morgan, his wife and producing partner, created an environment where everyone felt so supported in every conceivable way.”
The filmmakers responsible for LONG GONE BY are very excited to be premiering at the 16th year of HBO’s New York Latino Film Festival. Muñoz has been following the festival since its inception. She says, “the spotlight on Latinx creatives has created opportunities for so many filmmakers like myself. It’s bypassing the gatekeepers and opening the door for unknown talent to be seen.”
LONG GONE BY premieres on May 1, 2020, on HBO Latino as well as digital platforms HBO NOW, HBO On Demand and HBO GO.
All PR inquiries to Kathryn Musilek: km@sharkpartymedia.com
Director’s Statement from Andrew Morgan:
“No storyline has continued to haunt me over the last few years like the one surrounding immigrant families in this country. As I got the chance to spend time with some of these families and hear first hand about the fear that overshadows their lives, I knew I wanted to find a way to tell a story set against this backdrop that opened up space for more conversation, humanity, and love.
When we look back at this moment years from now, I believe the struggle facing immigrant families in this country will be one of the most defining challenges of our time. But for millions of people, this is not about history; it is about their story. There are roughly eleven million undocumented immigrants currently living in the US. Two-thirds have lived in this country for more than a decade and have fled countless cases of corruption and violence in search of basic opportunities for their families.
While dramatized in the film, Ana’s story is one that encapsulates the dream turned nightmare facing so many immigrants today. The story serves to humanize her struggle and, in so doing, asks larger questions about what kind of a society we are choosing to create. One in which our common values of hard work, family, and increased opportunity for all give way to a more narrow American story in which far too many people are forced to make impossible choices for those they love.
One of the things I love most about the film is that it can open a space for us to think and feel more deeply. It gives us the opportunity to encounter things we thought we understood in a whole new way. In spending time with these characters, I have come to see their story as both foreign and familiar to us all. It is a story about struggle, sacrifice, family, and what is at stake when the laws regarding the outsider threaten to betray our truest values.”
About Andrew Morgan (Director):
Andrew Morgan is an internationally recognized filmmaker focused on telling stories for a better tomorrow. His experience includes a broad range of work spanning narrative and documentary storytelling for multiple films and new media projects that have been filmed and released all over the world. The New York Times described his unique style as “gentle, humane investigations,” and Vogue Magazine wrote that it is “evidence that each of us can act as a catalyst for change within our own lives and work together towards a greater good.” He lives in LA with his wife Emily, their four children and a dog named Lady.
About Erica Muñoz (Lead Actress/ Associate Producer):
Erica Muñoz is an actress and producer known for her roles in the Pulitzer Prize-winning Broadway musical, RENT, Grey’s Anatomy, Numb3ers, & Jericho. More recently, she was featured in OAR’s “Miss you all the Time” video directed by Rudy Mancuso, & is currently shooting the lead role opposite Renee Victor in the feature, City of Crows.  She lives in LA with her husband and two children and continues to work on television, film, theatre and print work.
LONG GONE BY Online:
Official website: LongGoneByMovie.com
Trailer: https://vimeo.com/349481543
Instagram: https://www.instagram.com/longgonebymovie